Christine and I went to Fayetteville the weekend of May 21st, to attend the Fayetteville Crawfish Boil with Evan and Shadel, and a few friends.

Boy did we have a wild time! There must have been 800 people there, and 4,000 pounds of crawfish at least.

Amber, one of Shadel’s closest friends from high-school, brought her fiancee, Jason, from Phoenix in for the weekend and we all introduced him to crawfish with big warm Texas-sized crawfish boil. Jason didn’t have a single problem slopping down the mudbugs with the rest of us, and even learned how to suck the heads. 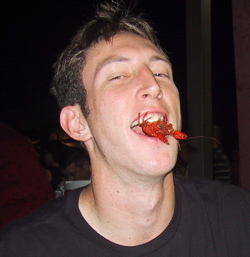 Ryan was there with his friend Jack.

Ella was just a tad fussy once, but was a model child most of the night, especially when Kelly held her.

All in all, I think the girls had a good time, but didn’t eat as many crawdads as the big boys, or drink as much beer (evidenced by the fact that Jason was caught relieving himself in the parking lot before the ride home)

We retired to Evan and Shadel’s house in Sealy and kept the party going into the wee hours of the morning, out on the front porch.

We had a great time and hope to do it again sometime soon.