Yesterday we took John Robert “Jack” to his first visit to our pediatrician Dr. Treybig.

He was so good on his first outing away from the house. It was really nice for Christine to get out too.

He received an excellent report! He is 7 lbs. 5 oz. now which made us so proud and relieved that he is gaining weight and getting proper nutrition. Dr. Treybig said that Jack looks perfect. 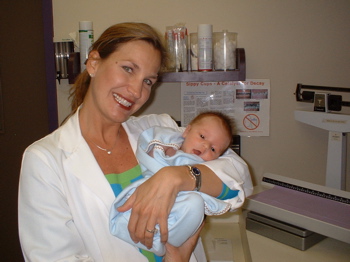 We go again next week for his blood screening tests and at two months he will get his first round of immunizations. Dr. Treybig recommended that we wait until six to eight weeks of age before we take him around large groups of people. So we may be changing our holiday plans a little bit.

Jack’s first Christmas may be a quiet one at home. We’re looking forward to January when we’ll be able to travel and visit family and friends.

He’s sleeping really well in his crib in-between feedings, which is something we learned is important to establish now. Hopefully he’ll grow accustomed to sleeping in his crib as he grows older, so that mom and dad can get some sleep at night as we progress towards longer nights.

So, at this juncture, I present a few galleries of photos we’ve taken over the past week:

The new gallery is a little more classy, and should be easier to navigate through, so I hope you enjoy it.

In the process, I rediscovered some old galleries that are just too fun:

Anyways, there’s more to explore in the Gallery.

Debbie and Raymond brought us some Aggie gear, so now Jack is ready for the game today: 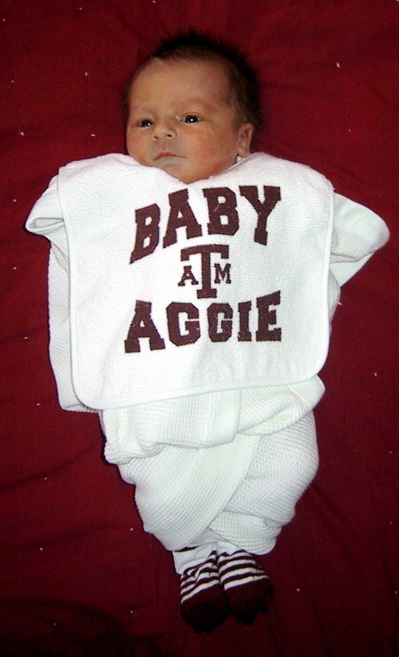 Last night, after Christine finaly got a couple of hours of sleep, I went in to wake her up to feed Jack. It was about 11:30pm, and she’d been sleeping since about 9:30. Christine hadn’t really slept more than those 2 hours all day, so she was considerably tired.

So, I said “Christine, it’s time to eat. Jack’s a little hungry.”

Christine shot up to a sitting position and started arranging her pillows behind her, like a good mom, ready to feed, when all of a sudden, she shook her head and said “Wait a minute, I’m feeding him?”

And she continued arranging her pillows, and when she was done she said “Wait. I’m feeding him right?”

I couldn’t help but chuckle at this second question.

She finished getting set up, and little Jack ate.

About half way through the feeding, Christine chuckled to her self and said “Man, I don’t know what I was thinking there for a second.”

I guess that’s what they call “Baby Brain”.

Today is Thanksgiving day, and Christine and I have so much to be thankful for. Most of all, we’re thankful that we’re home, and our little Jack is healthy.

The baby’s given name is John Robert Engler, Jr. He’s named after his grandfather’s (my Dad’s) best friend, our Uncle John, and his Daddy.

To ease the confusion about who we’re referring to when we’re talking about John Engler or the baby though, as well as to give the baby a sense of individuality, we’ve decided to call him “Jack”, which is short for John. Yes, I know it’s not really shorter than John, but that’s how we’ll explain the nickname. Calling the baby “Jack” also honors my uncle Jack, who was one of the wisest men I ever knew, and I know will be looking after him as he grows.

So, we’re all home safe and sound, and healthy.

Jack is one hungry little son of a gun, lemme tell you. He’s eating like a champ. Christine has decided to breast feed him, so we probably won’t get a whole lot of sleep these first few weeks of Jack’s life, but I’m really happy she decided to give breast feeding a try. (And boy does it seem to be working well).

Patton and Wesley have both been curious about the baby. I think they’re just happy that we’re home and that we didn’t forget about them totally. They’re indifferent to the baby now that they’ve had a chance to smell him and decide he’s not food.

Mary and Frank have been wonderful. Mary’s cooking Thanksgiving dinner right now and Frank mowed the lawn for me (what a Godsend… with all the rain we’ve had lately, I’ve not been able to mow it).

We’re really lucky to have family willing to stay with us and help out. (I can’t wait ’till my mom comes up and stays with us in a few weeks too).

We were so lucky to have sooo many good friends come visit us in the hospital. Sooo lucky. This kid’s going to have so much support as he grows up we don’t know what to say or think. To all of you that made it up to the hospital… thank you for making us feel so special.

To everyone that couldn’t make it, stop by anytime, or let us know when we should bring him over, and we’ll be there (give us a few weeks to figure out this parenting thing though 😉

Lastly, Marc Swendner, a friend of ours that also happens to be a professional photographer, came by the hospital and took some photos of Jack. They are posted here, and are the best photos we have of the little guy so far. We hope you’ll agree that they came out great, and that the kid is just adorable. Not bad for 24 hours old, huh? 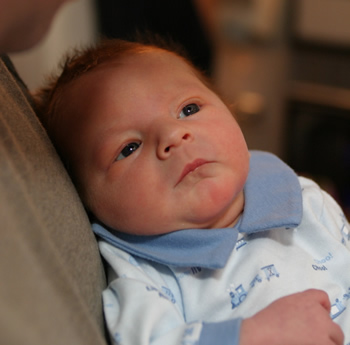 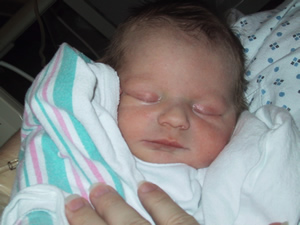 Yesterday, November 23rd, 2004 at 3:45 in the afternoon, Christine gave birth to a baby boy at St. David’s Hospital in Austin, TX.

I’ll let Christine tell you the birth story, if you’re interested (just email her) but let me tell you that it was probably the most amazing thing I’ve ever experienced. Christine was amazing, and did a great job throughout the labor. It went smoothly from checking into the hospital to having a baby 6 hours later or so…

Mom and baby are doing well today, and both are recovering from all the work they did yesterday at the hospital. Dad’s trying to get a little rest. The baby is eating well, and staying warm. He’s cute as a button!

Mary and Frank drove down from Dallas, and Jessica drove up from Bellville. Mary was present in the delivery room, and was a big help to both mom and me. They’ll be staying a little while with us we hope!

We had a lot of visitors at the hospital as you can see in this photo gallery.

We’re looking forward to a great Thanksgiving, as mom and baby should be home in time to have turkey dinner with the rest of the family.

Thank you to everyone for their well wishes… the phone calls mean a lot to us, so keep them coming. Our cell phone number is 512.658.5246.

Since Christine and I are just sitting around the house this weekend waiting for a baby to come, I figured I’d play with iMovie and see if I couldn’t figure out how to work it.

I figure I’m gonna need to know how to create a movie for when we start putting movies of the kiddo online, to share with our friends and family, and I’d rather know a little about what I’m doing before the video footage is important, so, I whipped up a little vonage from some footage I shot Evan, Shadel and Ella were up in Austin on July 25th…

I think it came out really cute, and hope you do to.

Christine worked her last day at the office on Tuesday, and it’s now Thursday, and no baby yet. She was due today (11/18) and it didn’t come. I’m now convinced that doctors don’t know what they’re talking about.

In the past couple of days, we’ve gotten the nursery completely finished. We changed the sheets on the mattress in the crib, put together a swingy-seat and a bassinet, and installed carpeting (okay, really, we just put down a rug).

It’s cozy in there, and the cat loves the bassinet, so we may just let him sleep in it.

Christine’s feeling fine, and is putting up with my constant “Are you having a baby, yet?” questions (I’m asking her that about once every 4 hours now). She keeps telling me “not yet.” But every few hours she says “ouch” … probably a contraction or something… so I’m hopeful that she’s really going to have the baby sometime in the next week or so…

We’ll let you know when we know something.

Christine sent this email out this morning:

John and I went to the doctor this morning. Things are progressing! I am 80% effaced and 1 cm dilated. Over the last three weeks I have shown steady progression, so the doctor feels that this thing will probably happen on its own within the next week or so. We meet with him again on Tuesday of next week (if I make it that long) at which point he will put me on the schedule for induction either late next week or early the week after. Today my first blood pressure reading was border line, so they took a second reading at the end of my appointment and it had come down quite a bit. He is not too concerned over the blood pressure, but the nurse told me to get plenty of rest. He said that if I needed to continue working I could, but also said it may be a good time to stop if I want to. I had thought that last Friday would be my last day, so I think I am going to finish some things up today and then stop working as of tomorrow.

I guess now we wait. We’re so excited!!!
Love,
Christine

This comic was in the paper last weekend:

I put some recent pictures of the spoiled dog online, wouldn’t you agree he’s a “Poo Poo the Male Bichon Frise”?

Christine and I dressed up for Halloween again this year. The party was a blast, and we enjoyed seeing all of our friends…

Josh posted photos from before the party and during. Glad I’m not Catholic.

The last time Christine and I went to Bellville to visit Ella, she was standing up in her crib, and was too cute. She reminded me of the phrase “Kilroy was here” so we snapped a picture: 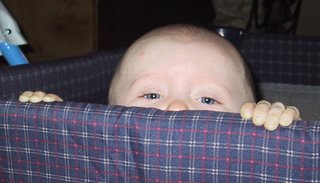 Anyways, as I was writing this, I wondered where that phrase comes from, and found this website to help answer that question. If you’re interested, read more at KilroyWasHere.org.

There are a couple more pictures of her and Wesley playing here.

It’s November 8th, and Christine is due on November 18th. We’re officially 10 days away from the big day (though that big day could actually happen any time between now and Thanksgiving). So we’re ‘in the red zone’ … don’t know if we’ll pass, run or kick, but we’ll be going for it, rest assured.

I can’t accurately describe how I feel about the fact that I’ll soon be a father, other than to say I’m extremely excited (jubilant would be a good adjective, I think) and looking forward to welcoming our baby into this world (there are about 5,000,000 feelings running through me at any given time, and I’m not the one that has all the extra hormones running through my body). I feel blessed at this point that Christine’s pregnancy has been relatively trouble-free.

She’s been a trooper and I’m really proud of her and thankful that she’s been able to go through all of this so far. The best is yet to come for her, and I hope I can be strong enough to help her through the last few days of this ordeal.

In the mean-time, I’ve posted a couple of photo galleries that hadn’t been posted before: