We’ve been busy with Christmas for the past week or so, and that’s the primary reason you haven’t seen an update on this website lately, but…

I took some time this evening to edit and post a few more photo galleries:

Coming later this week (hopefully): Photos from the annual Teaff family Christmas gathering in Houston, some photos of Ella that Grandma had on CD last time she visited, and possibly even another movie or two from Christmas.

This week, Grandma came to visit Jack, Christine and I, because I was flying to Tulsa for work on Tuesday. (Sorry Tulsa family… I meant to call, I promise).

So, while I flew up to Oklahoma for work, Grandma Engler came to cover for me while I was out of town, and to help out during the day while I was at work. She stayed until today (Thursday).

While she was here, Grandma cooked some amazing meals, like homemade chicken soup (with some really good homemade noodles) and a fantastic potroast. Both meals are in the fridge, and will feed us for a few days still. She also brought up some Bellville Meat Market Sausage (always a crowd pleaser) and cooked steaks, asparagas for dinner one night when Brad and Kim came over.

Christine was able to get out of the house one night thanks to Grandma, and Christine had a good time with her friends at the Armadillo Christmas Bazaar.

Here are a few recent photo galleries from the recent past, starting with the ones from Grandma Engler’s visit:

This past weekend, Christine and I loaded up the car, and took Jack on his first outing. We drove to Fayettville to meet Evan, Shadel and Ella, and Reese, Karen and their 7 month old little girl Gabby.

We tried to take some family photos while we were there (the 6 of us) but I set the camera up wrong before I handed it to Reese, so we didn’t get photos, but we did get some video footage, and it turned out really cute, so…

I took the video footage that we shot this weekend and made a little video montage for you all. Enjoy. [Quicktime is required] 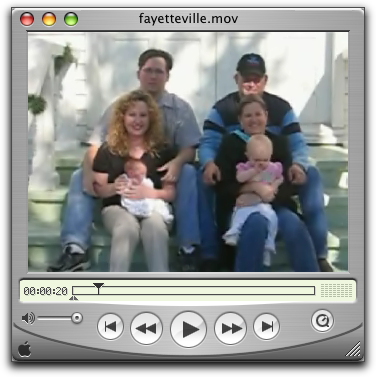 I posted a few photos from the trip as well.

In an experiment with iMovie, I made this quick music video of Jack, with music by Queen backing him up. The song is “Don’t lose your head” from the A Kind of Magic album with was also the soundtrack to the movie “Highlander“. So if you’ve got a few minutes and want to watch Jack in a music video, click the image above.

Jack survived his two-week check up, just fine. Dr. Treybig says he’s growing just fine, and that everything seems to be in order (she actually said “he’s perfect” and we agree). Dad didn’t survive the trip unharmed: The little guy pee’d on me right before the nurse stuck his heel with a little needle… which didn’t make him happy, by the way.

He weighs 8 lbs. 2 oz. and is 21 inches long. He’s grown a full pound since he was born and is an inch taller than he was last week. Dr. Treybig says he has a birthmark on the back of his head and maybe on his back.

Also, last night, Michelle visited after work. Josh also came over after work, as Elise is out of town at a funeral in Iowa (our sympathies Elise).

I took some photos last night of Jack with Josh and Michelle with the new camera, as I’m trying to learn how to use it better. I think they turned out pretty good. They’re a little dark on my Windows laptop screen, but look great on the Macintosh screen, so I apologize if they’re a little dark for you.

Mary and Frank (Grandmother and Granddad, as we think they’ll come to be called) left Austin today after spending almost two full weeks with us.

We’re very thankful that they were able to stay with us for these past 12 days, and very thankful for all they’ve done to help us get through this crucial first couple of weeks (like laundry help, cooking breakfast, lunch and dinner, helping out with (basically doing all of the) yard work, installing fire-alarms, changing dirty diapers, putting up the Christmas tree, and putting little Jack to sleep… and sooo much more).

Don’t worry Frank and Mary, we’ll post a new photo or video of Jack every couple of days so you can keep up with his growth (and I’m sure Christine will call often. Jack is 12 days old today, and he was sad to see Mary and Frank leave (so were Chrstine and I).

Next up in the hot-seat of visiting: Grandma Engler will be here on the 13th or 14th for a few days… can’t wait!

Oh, and yes, this means tonight will be our first night as a family by ourselves at home on our own… hope we all make it through the night just fine!

And since I’ve got the first shift, I’ve decided to post a few more photo galleries:

Just in case you need some inspiration for Christmas gifts for a baby this year, I read this article on CBSMarketwatch about what makes good gifts. Let me point out a few specific items I saw: 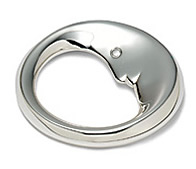 Cold hard metal always makes a nice gift for babies. Especially the discerning type. Little babies need cold hard things to chew on as they get their teeth, so these gifts will end up serving dual purposes,

From Tiffany for Baby:

If you’re not into hard cold metal as a gift this Christmas, there are always nice comfy plush toys from some retailers. Instead of settling for those plush Elmos and why not turn to a fine cashmere and wool brand that has staying power: 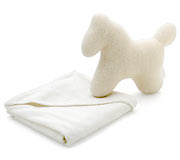 Just wanted to give ideas to anyone that might be having a hard time thinking of things to get new babies.