Last Friday, Christine and I got on a flight, with Jack, to Seattle. We were heading up there for the weekend to see friends (The Penfields) that we really hadn’t seen in 3 or 4 years, and to meet their daugher (who is 3 now) and let them meet Jack, and to see how big Joel has gotten since the last time we saw him.

Long story short, we had a great trip, but it was way to short, and getting there was “half the battle” so to speak… Needless to say, American Airlines cancelled our Dallas to Seattle flight, so we were facing the possibility of not even going to Seattle for the weekend, but one of their star ticket agents understood our plight, and booked us through Denver to Seattle on Friday. Instead of arriving at 2pm as we’d intended, we arrived at 11:00pm. Jack was pooped.

We were staying at a friend’s condo in downtown: Fourth and Pike. An amazing address, and a great little one bedroom condo: Perfect for “getting away” for the weekend, or a week or two…

On Saturday, we got up ‘early’ and met Kelly, Greg, Joel, and Aubrey at Pike Place Market, and watched the fish throwers throw a few fish… then we walked down to the park, and then headed to our Harbor Cruise reservation. On the cruise, we chatted and caught up, and enjoyed learning about Seattle from the water, and spending time with the kids.

After our cruise, we grabbed a quick bite to eat at Red Robin, and then walked back to the fish market. Aubrey was cute… helping me push Jack’s stroller (he was passed out tired. We said our goodbyes and took Jack home for a nap.

After napping, we headed to the Seattle Aquarium… talk about fun for Jack. He really enjoyed looking at all of the fish and seals and starfish. It was really cute to see him exploring the aquarium.

We ate dinner at the Fisherman Restaurant on the peer, and let Jack have fun running around while we ate… I got up with him and ran around with him… the waitresses thought it was cute.

On Sunday, Jack and I got up early and went for a walk, and took some photos. Then we brought breakfast and coffee up to Christine. And then Christine packed while Jack and I took a nap.

As we were leaving our condo, we realized that the Seattle Gay Pride parade was taking place right outside our condo. Heh… “too funny” is all I’ll say.

We got in our car, and drove to the airport for the flights home. Jack was great on the 4.5 hour flight to Dallas, and fell asleep in Dallas before we even took off, and didn’t wake up until the morning.

It was a great trip, long overdue, and way too short.

The photo galleries are here:

“The words that a father speaks to his children in the privacy of home are not heard by the world — but, as in whispering-galleries, they are clearly heard at the end and by posterity.” -Jean Paul Richter

We spent the day working in the yard and enjoying each other’s company all day. We did try to go buy me a good pair of shoes, but the store didn’t have what I wanted. I also made a trip to JCPenney’s to buy some new shirts…

We capped of the day with a few hours out in the front yard in the pool. Then we put the pool up:

I haven’t posted a lot of photos lately, mainly because the new job is taking a lot of energy, and Christine, Jack and I have been busy and sick lately.

So, here are some photos of Jack from this past week.

The first two are of Jack dribbling milk down his chin and chest. Then Christine took this photo of us reading before bed one night.

Then, I snapped these three photos of Jack smiling, laughing, and singing “if you’re happy and you know it, then your face will surely show it” and then him pulling his pull toys around his room.

Look at the forecast for this week: It’s not even July yet. 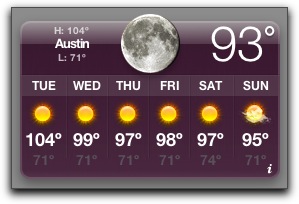 Brooke and Steed asked me to come take some photos of their daughters (Louella is 2 and a half or so, and Adeline is 3 weeks) today, so I went over around 9 a.m. I was there for about an hour, and had fun taking photos of the girls.

For those of you expecting, or that have small babies, you’ll get a kick out of this video:

Josh’s mom emailed that to me, and Christine and I died laughing watching it over and over. Enjoy.

Last night I got a needed good night of sleep after I returned from San Jose (was there for the past two days at a conference for work).

This morning, Christine let me sleep in until 8 a.m. and then we headed to the OB. Christine and I were there for an ultrasound to check on the baby. And to find out the sex of the baby.

Here are the images of the ultrasound. The second one is the one where the evidence of the sex is. Click on the images for a larger view: And so, yep, that’s the news folks. We’re having another little boy in October.

The new kid will learn to love hand-me-downs and Jack is going to have to learn to be a big brother.