Last weekend, Frank (Christine’s Dad) came down from Dallas, and Michael, her brother, stopped in Austin on his way from Houston to Dallas.

Michael brought some furniture up from my Mom’s house that we’re going to use for a while… great antique furniture pieces… thanks Mom! He also took the green monster couch that Christine and I have lugged all across the country for the past 6 years. Christine’s grandfather built that couch a long time ago, and it weighs about 5,000 pounds. Love the couch, but we just didn’t have room in the house for it anymore.

Frank came down to help us fix up the house, and finish getting it in shape, so that the house is decorated and ready for a baby that’s coming in November.

So, starting last week and ending today, we painted the ceilings in the remaining rooms in the house (7 rooms) and the walls in 5 rooms. Michael did some heavy lifting when it comes to painting, and filling holes, and the like. Every room in the house has been painted now, except the master bedroom (but at least the ceiling is done in there).

Michael went home last weekend, but Frank stayed the whole week, and boy did we get a lot of work done with him here.

Frank’s biggest job was replacing our old linoleum floor in the Kitchen. Frank ripped out the floor and subflooring, and then leveled the original linoleum and plank flooring before laying down some individual linoleum tiles that Christine picked out at Lowe’s. I think the floor job took the better part of 3 days to complete, spread out over about a week, and boy does it look great now!

Along with replacing the old Kitchen floor, Frank also fixed both screen doors be completely refurbishing them, installed a door on a closet in one of the bedrooms, and installed two doors on the baby’s bedroom.

I think Frank replaced just about every light switch and electrical outlet in the house (most of them at least) as well as two new light fixtures in the main bathroom of the house. He also helped us uninstall every piece of window dressing hardware that was in the house (we hated most of the stuff on our windows)… He also hung a ceiling fan in the baby’s bedroom.

I’m sure there are a few million other small things Frank did to our house while Christine and I were at work this week (a house built in 1949 presents plenty of little things that need to get fixed if you just look a little) and for all of his help, we are extremely greatful.

Oh yeah, and Frank also cooked most dinners this week… We ate two really good smoked chickens, a garlic chicken, some waldorf salad, chicken soup, and it was all gooooood.

So, the house is almost done. We’ll have a house-warming party in the coming month now that we can decorate and organize properly… nothing like waiting 4 months to get your shit together.

Thanks Frank, Michael, Josh and Elise, Mom, Mary (for letting Frank come help), and Debbie and Raymond for the help getting our house to where it is. Give us a couple more weeks and we’ll post a few pictures of the interior (still a little cleanup and decorating to do). 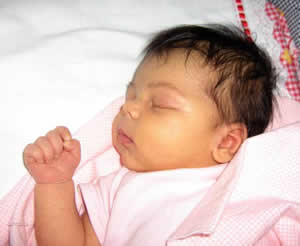 From Alex’s email to my mom:

“Victoria Elizabeth Soto-Teaff was born August 2nd, 2004 at 7:43 am. She weighed 7 pounds 8 ounces and measured 20 1/2 inches long. She is doing really well and being very patient with her mom and dad as we learn the ropes of parenthood.”

Congratulations Alex and Abner, you have a beautiful baby, and we’re all very happy about having another cousin. We love you.

Saturday night, Christine and I went over to Stafford’s new house. Christine works with Stafford, and his older sister is one of her best friends from a past life. Stafford just bought his first home, and threw a little party to celebrate becoming a home owner.

We got there around 5 (after priming a room that we’re painting in our house) and immediately joined the group in teh backyard. We played dominos, ate some bar-b-que, and enjoyed the conversation long into the night. I took a few pitcures throughout the night.

Towards the end of the night, Stafford showed some real class, and offered to let me borrow a few golf clubs, since I’m just taking up the game. He said there’s no reason to buy any clubs yet, if I can borrow enough to start off. So, I’m now the proud care-taker of a 5 iron, 3 iron, a wood and a putter. Good clubs too. Now I just need a bag and a glove, and I’ll be set for a while.

On Sunday, I painted. I primed the ceilings of three rooms, the dining room, and the kitchen. I then proceeded to paint the dining room (two coats) and all three ceilings. I was done, and tired. I’d been painting for 5 hours or so.

Christine came home after spending the day shopping to decide that she didn’t like the color in the dining room, so she went out to Home Depot, bought a gallon of paint, and we painted the dining room again. Sound familiar? It should, we did the same thing a few years back in Fort Worth.

Next weekend? More painting, but that should be it. Should be done after that… unless ‘we’ decide on a different color.

This past weekend, my Aunt Peggy brought Payton up to visit Austin.

They arrived on Thursday night, around 10:00, and we stayed up chatting for a little while. On Friday, Christine and I went to work, while they tootled around Austin visiting a few tourist stops, and doing a little shopping (Payton goes back to school this week).

On Saturday, we got up and Payton really helped us out by helping me get the yard in shape. Payton weedeated and edged while I mowed the yard. We watered the flowers and then got ready for a full day.

Around 2:00 or so, we went to Freebirds, picked up lunch, and headed out to Mt. Bonnell for a little site-seeing and picnic, overlooking Lake Austin. It was very nice out there…

Then we drove around Austin a bit, stopping at Austin Found before heading over to Amy’s Ice Cream on Lamar for a quick snack, then home for a quick nap.

Later that evening, we went to the Congress Street Bridge to watch the bats come out. Wow! Christine and I’d never seen them so close, and it was pretty awesome to see them, and to just spend that time with Peggy and Payton.

We ended the night with a late dinner at the Shavy Grove, and then headed home to go to sleep.

On Sunday morning, Payton and I played with iTunes for the better part of the morning before Peggy and Payton headed home.

All-in-all, a fantastic weekend… I’ll have pictures from the weekend up later this week…

update: I’ve posted the photos, including a few of the bats.

Today, I swung a golf club for the first time in my life.

A buddy of mine, Kevin, and I met at the Hank Hankey Golf Ranch of Austin tonight. Kevin asked me earlier in the day if I golfed, to which I replied “no” and he asked me to hit the driving range with him tonight. I figured “why the heck not?”

The section of the driving range set aside for drivers was pretty full, so we headed over to the side that’s set aside for irons, and I got my first lessons from a buddy.

The first advice Kevin gave me was typical Kevin: “You wanna know what the first thing you need to know about your golf swing is? Just try to look cool!”

Kevin said “No, I’m serious. It sounds stupid, but try to look cool, and relaxed. Don’t get too tight, be conscious of the fact that you look cool doing this, and you won’t feel so silly making the small adjustments I’ll tell you to make throughout tonight.”

So, I took his advice. And I hit my first ball with a 3 iron.

Kevin was just impressed I hit the ball.

We both nailed about 100 little white balls down the driving range with irons before heading over to the side for the drivers. Then we polished off the rest of the balls before retiring to our vehicles to polish off a beer.

It was a lot of fun and I’m really looking forward to my future golf game. It can only get better from here.