Believe it or not, Christine and I didn’t take a million photos in May… probably because we were travelling too much. So, here’s the roundup from this month:

Holding a Bottle – Jack can sort of hold his bottle now.
Changing Table – Photos of Jack on his changing table after a bath.
Jack’s Faces – Jack was making funny faces at me one night.

On Monday of this week, Jack turned six months old.

Jack had a doctor’s appointment on Monday, so we got to see Dr. Treybig again, and Jack had to put up with those mean nasty shots again (only 2 this time though).

Jack was 16 pounds 8 ounces on Monday, was 26 inches long, and had a 44 centimeter head circumference. Jack’s measurements put him in the 50th percentile for his age-group. Jack’s growing steadily but surely…

He took his two shots like a man… that is to say he cried a bit, but was fine after a couple of minutes of comforting by his Mommy.

Jack’s smiling a lot now as a six-month old. He laughs alot, and enjoys himself during the day. He can sit up, and grabs things really well. We think he’s teething, as he’s constantly drooling and putting things in his mouth. He can almost hold his bottle in his mouth to feed himself (that is to say, he can hold it, but doesn’t always hold it at the right angle). He likes to try and feed himself with a spoon, but 90% of the feed he tries to feed himself ends up anywhere but his mouth if Mommy or Daddy aren’t controlling the spoon. Jack also goes to bed predictably at 7:30pm every night, but recently, he’s started going to bed on one end of the bed, and then after we’ve put him down, he crawls/wiggles/squirms to the other end of the bed to play with his crib toy before eventually falling asleep. We end up checking on him when we go to bed, and he’s so cute, sleeping there like a little angel, butt in the air, one hand in his mouth, the other out to his side grasping his little bear.

It was also Christine and my seven year wedding anniversay on Monday. We celebrated by going to bed early after watching a show or two on TV that we’d Tivo’d. We also treated ourselves to some Skinny Cow ice cream sandwiches.

Oh, and we put down a deposit on the house we’re going to build. It should be ready by November, and we’re really excited about it… should be exactly what we’re looking for though it’ll take a while longer to get it than I was hoping.

So, to celebrate Jack’s six month birthday, we present this movie: 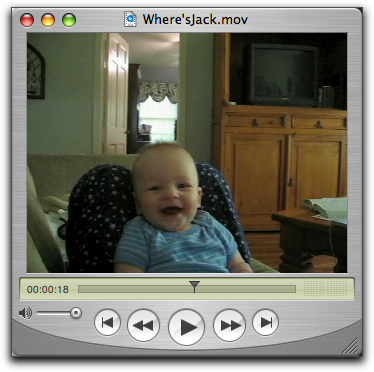 Read this if you want a quick chuckle. It’s too funny to read about Josh’s first diaper changing experience.

Josh: Christine and I and especially Jack appreciate your hard work bud.

Yesterday, Christine and I spent the afternoon with our favorite realtor, driving around southwest Austin, looking for a new house. We’re not sure we want to sell the house we’re, unless we can find something else we’d like to move into. So, we figured we’d look.

We didn’t really find anything we liked, though we don’t mind the idea of building a home… though I really don’t want to wait 6 months+ to get into a new house… but I’m warming up to the idea again.

While we were out house shopping, Jack spent the day with Uncle Josh and Aunt Elise. Josh had to change a dirty diaper, and for that Jack and I will be eternally thankful to Josh. It was Josh’s first experience changing a diaper, and if you hear him tell the story, you’ll laugh over and over… Too funny. Thanks again Josh and Elise.

We’ll keep everyone posted on the progress of the house hunt.

I flew to Miami on Wednesday for a meeting with a potential client. This meeting went pretty well, and actually ran over its alotted time by an hour and a half… which is a good thing in my line of business (keep them asking questions, and keep asking them questions).

One thing I forgot to take with me to Miami was my English to Spanish pocket dictionary. I forgot that Miami is an “English as a Second Language” (if they know a second language at all) town.

I ordered coffee at the airport coffee shop on Wednesday afternoon, and the woman looked at me and said:

Luckily I know that leche is milk (you’ll learn that in any decent breastfeeding class in Texas), and café sounds like coffee. I’m also a frequenter of Starbucks, and have picked up a little about European coffee from our trip to St. Maarten a few years ago, so, I answered:

Americano means “American Coffee”, which is most places means a shot of espresso with hot water to fill the cup, possibly with room for cream and sugar. I was rewarded for my excellent command of the spanish language with a cup of coffee. Black, just like I like it.

The lady behind the counter handed me the cup of coffee, and said “Gracias, uno momento.” I replied “de nada” (it’s nothing, or your welcome, I think).

Then she told me the total. I had no idea how much money she wanted, but, luckily, the register had a LED display of the total, which is spun around, so I could read it. I handed her $2.00, and as I walked away, she says to me:

“Hey honey, you forgot your change.”

At least I got the try and practice some Spanish.

Over the past few weeks, Christine, Jack and I have been busy.

Christine has been focusing a lot of her time on working with Angela Pierce’s pre-wedding events (Angela is Christine’s college roommate, and has been our friend for a long time. She’s getting married to David this summer in Dallas).

This past weekend, we were in Dallas, visiting clients, spending time with the Grandparents and Uncles, while also attending a couple’s shower for David and Angela, and then celebrating Christine’s first Mother’s Day.

On Friday, I spent the day driving around Dallas, visiting clients. Both meetings were fun. I met a fellow Aggie at one client (which always help open barriers to conversation).

The shower on Saturday night was a blast. All of David and Angela’s friends are fun to be around… We floated a keg of beer at the party by 10:00 pm, and someone had 4 cases of beer that they filled the fridge with… Then… they broke out the bottles of various liquors and started toasting. I don’t quite remember what they were toasting, but it was fun. I also talked to Angela about private vs. public school, which was educational (heh… get it…?). Angela attended private schools as a kid, and now she’s works in the public school system, so I thought her opinion would help us, as we think about where Jack would best be served in the future.

Christine and I left the party early (around 10:30) and went home to get some shuteye. We’ll get some photos of the evening up soon.

On Sunday, the family gathered for Mother’s Day lunch at the Kamp house. We enjoyed a ham dinner, with home made potato salad and other fixins. Grandmother and mother opened their cards, and we all said thank you to them. Mother’s really don’t get enough credit usually, so it’s nice to set aside a day just for them.

So, Christine and I are shopping for a new house, sort of. We haven’t decided in earnest that we’re selling the old one, but it’s tough to get a lot of work done with all of the daily distractions. I absolutely love working at home, and having access to the kiddo and the wife, but its tough to concentrate when your son is out in the living room, making fun noises and playing… makes me want to quit working and go play with him too much. So, we’re thinking we need a slightly bigger house, or at least on where the office is set apart from the rest of the living spaces. It’s either new house, or out-building for the backyard here. And it needs to happen sooner rather than later (stressful, I know).

A few weeks ago, I was in Cleveland for the night, because I was visiting a new potential client. The client meeting went great, but the night before, I was stuck in a hotel without power. It was pretty comical. I was given a chemlight glowstick thing (like you see at halloween, and like we used to use in the Army). It was interesting trying to read a book that night by chemlight, and it reminded me of being in the Army again, especially considering they’d placed me in a smoking room, so the pillow smelled like old stale cigarettes… blech. Totally reminded me of the Army days. They gave me $20 off the room because it was smoking, but didn’t mention the fact that I had no power all night as a reason to rebate me even further that morning when I checked out.

I flew to Loveland, Colorado the next day, and met with another client. This new client will be signing a contract shortly, so even though all the travelling sucked, I landed a new client. Which is good.

Then I got a signed contract last Monday from another new client, this one based in San Antonio. With this new contract, all is good with the job now, as I’m above quota, and concentrating on growing that margin between quota and my performance as much as I can.