Last night, Christine and I celebrated our eight year anniversary. It was a really nice evening.

Erin showed up around 6:30, to take over with Jack.

Then Christine and I drove downtown, parked, and walked to the Roaring Fork restaurant in the Stephen F. Austin hotel on Congress. Man, the food was amazing.

We exchanged gifts before we sat down. Our gifts to each other were perfect for each other… we both agreed on that.

After dinner, we walked over to the Omni Hotel where my office is, and took the hotel elevator to the roof top pool, just to look out over the city. How cool! We sat down and enjoyed the breeze for a few minutes and chatted before heading home.

Happy Anniversary babe! I love you!

(In case I didn’t tell you, I quit my job at 24/7 Real Media two weeks ago… and my first day at the new job confirmed I did the right thing for me and the family.)

Today was my first day at the new job. I showed up at 8, spent about 3 hours with the C-Level execs talking turkey, then spent a couple of hours with one of my direct reports. Then a meeting or two, then played with my laptop getting some of the settings just right. Then another hour or two with a peer and then with the President. Got home at 6:00… Then after playing with the kid, eating dinner, giving him a bath and talking to the wife a little, I started digging into some of the numbers I’ll need to learn. Overall: A great day! Can’t wait for tomorrow.

This past weekend was a lot of fun. On Saturday, I hung out with Jack all day. Christine met up with her friend Tonya around 3:00 and they had a great afternoon and evening together. They went to the Alamo Drafthouse to watch a movie, and then went to dinner at Mirabelle. Christine got home around 9:00 and we went to bed early.

On Mother’s Day, I let Christine sleep in. Jack and I went into the bedroom around 8:45 and woke her up by singing “Happy Mother’s Day” to her (to the tune of the Happy Birthday song).

After some kolaches (that Jack and I had procured from the Lone Star Kolache place on 35th and Lamar) we all got dressed and headed to Zilker Park.

And boy, did we have fun.

Jack chased the pigeons and sat down with a few squirrels: And then we rode the Zilker Train.

We let Jack nap until 3:00, and then headed to a birthday party for Dylan Levy, the 2 year old down the street. That was fun too… We ate cake, and played, and had a ton of fun. The folks at MyGym here in Austin do a great job with little kids parties.

Jack also got a few presents from Grandma in the mail this past week… and he’s learning to play the harmonica. At the end of the day, we gave him his harmonica to play with while we changed his diaper. He thought that was a grand idea, and you should hear him now… he’s really getting good at it.

Hope you all had a great Mother’s Day too.

Last week, I spent the week at Ad:Tech in San Francisco. It was a great week in San Fran… the weather was perfect. The days were long (up at 9, in bed around 2) for four days straight, but work can be work, and it was fun.

Christine and Jack spent the week in Dallas with Grandmother and Granddad.

Frank sent this photo of Jack from their week up there: 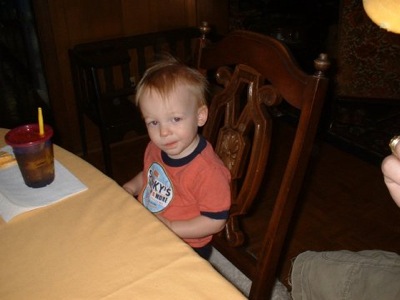 Jack is getting to the point where he’s really got his own little personality, if you can’t tell from that photo. 😉

One morning, Jack and I took a walk around the neighborhood. When we got to Herbert and Lori’s house, we spied Dylan and Lori outside playing in Herbert’s old beater bug.

Jack wasn’t content to just sit in his stroller, so we put him in the car with Dylan, and Lori took some photos. You can see them all here.

This one is my favorite:

Old bugs are cool. Herbert’s reminds me of the one I bought for $300 in high school. It had rusted out floor boards, a rusty body, a sunroof that was permanently stuck open, and a kickin’ Jensen stereo system that Josh and I put in one afternoon.

The backseat caught on fire once. The paint job was red spray paint out of a can (which made touch ups easy to do). The suspension was totally shot. The front bumper fell off a few times. I used to feed cows in it by putting someone in the trunk (up front) and driving through the pasture backwards while they sat in the trunk with the feed and dropped the feed as we backed up. It had a top speed of 52 mph or so, but only going downhill with the wind at your back. The breaks sparked when you hit them (which was cool at night, as long as the cops weren’t behind you). And, I got a my first ticket in that car (for not wearing a seat belt). But, I made it to Dallas and back in it once (didn’t dare to try it twice). It was a good car.

I think my mom sold the car for $400 the next summer after it quit running… loved that old bug.