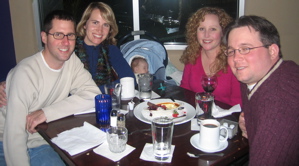 Christine and I went to dinner with Josh and Elise Janicek Thursday night at the Y Bar and Grill in Oak Hill to wish Josh a happy birthday (which was on Wednesday night).

We’re planning a baptism for late February, but haven’t finalized the plans. Once we have, we’ll let you know when and where.

Some photos from the evening are posted here.

For all of you wondering how we calm Jack, we’ve made a little tutorial video for you: 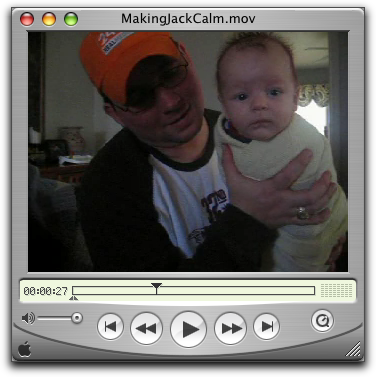 Jack learned how to hold his rattle this week. It’s took cute to see him learning new things. Right now, it seems like he’s more interested in trying to put this rattle in his mouth than he is in playing with it, and he sometimes hits himself with his rattle, which is funny.

Enough of me telling you about it. Here are some photos of him holding a rattle, and a new video for you: 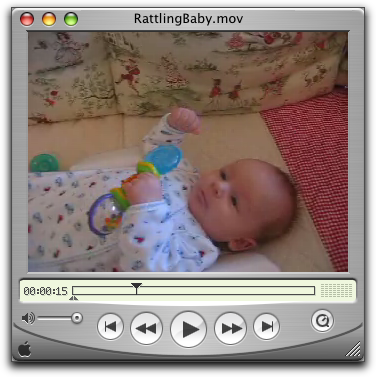 Some of the people we know told us they didn’t believe we had a tulip tree… so, I took some pictures of it in bloom. It blooms for about 2 weeks in January/February, so, if you want to see it in person, come over quick. It’s been blooming for a week and will likely be done blooming by Valentine’s Day. 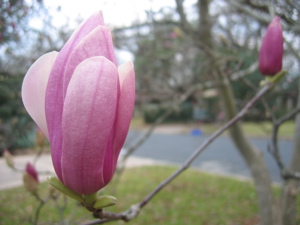 We have a big tulip tree our front, and a little tree out back.

Last night, I fed Jack his bottle at about 1:30 in the morning.

He was done eating all 5 ounces of the bottle by 1:45, and wasn’t really sleepy.

I held him in my arms and around 1:50 or so, he was smiling at me, and laughing at me. It was so adorable.

The thought that someday this experience will be over, and I won’t have a smiling, laughing son at 2:00 in the morning got to me.

Christine has an old family friend that is getting married in Guanajuato on May 28th, and when we found out we were invited we were stoked! So excited, in fact, that we’ve been planning this trip for months now.

It’ll be our first trip away from Jack for a weekend… ugh.

At the same time, it’ll be great for us to get away, and to do it in a great town.

I’ve already bought the domain ExploreGuanajutao.com and will put up a website about our trip when we get back with lots of photos I hope.

We’re taking applications for baby-sitters for that weekend too 😉

I flew up to Dallas yesterday, met with my client (and old friend), and then headed to the hotel. It took me an hour to find the hotel, because it wasn’t the one I usually stay at in Irving, and it really wasn’t easy to find. I stayed at the Candlewood Suites in Irving. It was nice, but not in the best location. There are a bunch of other hotels right there that would be easier to find/get to.

After checking in, I worked a little, then called one of my best friends: Misha. Misha and I met for dinner at the Macaroni Grill in Lewisville for dinner at 8:00. We were there until 10:30, and had a good time enjoying drinks and dinner, and catching up with each other. I kid Misha that I am still living my early 20’s out through him vicariously. It’s always good to see him and hear the latest stories. He has promised to come visit in late March, so I’m going to hold him to that.

Misha gave me my copy of Apple’s new iLife suite, and let me tell you… the new iPhoto does some really cool stuff with books and slideshows, and iMovie looks like it does some great stuff too, though I haven’t played with it yet.

This morning, I got up and worked from the suite (I hate it with clients cancel their appointments at the last minute) until about noon, before heading over to visit a prospective client in downtown Dallas. That was a fun meeting that lastest about an hour and a half. I’m now back at the airport and can’t wait to get home (flying stand-by on an earlier flight hopefully).

I flew to Dallas this morning on an American Airlines MD-80. The flight was packed, but it wasn’t at all uncomfortable, thanks to American’s “More Room in Coach” mantra. I was able to lean my seat back and cross my legs (try that in a suit wearing a part of boots on Delta).

Oh, and it was really tough to leave Jack and his mom this morning. right before I left Christine handed him to me, and when I held him he strrrrreeeched like he was saying “no wait… just a few more minutes” and then he stared at me for a few moments. I may be in Dallas but my heart is in Austin this morning.

Today, Jack and Christine and I headed to Dr. Treybig’s office for Jack’s two-month visit (and that most horrible of four-letter words for a two-month old baby: shots).

But, he did really well folks. Really well. He took them like a man, and only got a little fussy towards the end of them. (Okay, he screamed pretty good, but the nurse that gave him the shots was awesome, and they went really quick, so he was back to normal pretty quick.)

We learned a lot at the doctor office today. Seems like we should start trying to put Jack on a schedule starting now… though she said he might not pick up on the sleeping schedule until he’s about 4 months old. She said that we might want to start feeding him one formula bottle right before bed now, and that usually helps them sleep a little longer at night (wouldn’t that be nice?).

Jack weighed 11 lbs. 12 oz. and is 22 1/2 inches long. He’s growing well and looks good. All of his joints work well, and he’s super strong. He showed of his strength for the doctor by standing with Daddy’s help, and by picking his head up and looking around when she put him on his tummy.

It was a good visit for all of us… especially now that Jack has his immunizations.

Some photos from the trip to the office and the visit are here.

Bob Beuerlein is home from Iraq. He’s been home for a few weeks, and now that he’s settled back at Fort Hood, he came to visit us in Austin. To celebrate we headed to Debbie and Raymond’s lakehouse (after a quick stop at Fry’s) on Saturday.

Bob brought a couple of his Army buddies, Jessie and Chip, down from Fort Hood. We invited Marc, Cyndi and Rowan out to the lake too. I cooked steaks, salads, and some fruit.

The boys played poker while the girls watched the kids. We played no-limit Texas Hold’em, and I won the game. (Sorry guys).

Here are some photos from the evening.

After everyone drove home on Saturday night, Christine, Jack and I settled in for the night.

We woke up on Sunday to watch 50 First Dates (really cute) and Chronicles of Riddick: Pitch Black (not bad for a Sci-fi flick with Vin Diesel in it). We ordered pizza for lunch.

Jack swung by the fire we put in the fireplace while Christine and I cleaned up the lakehouse, so we could go home.

Here are two photo galleries from the past couple of weeks that I haven’t gotten around to posting yet:

Heidi comes to Visit – Heidi Bookheim worked with me at the Statesman, and dropped by for a visit last week. Jack is too cute smiling at people he’s never met before. Good social skills kid.

Daddy with a Beard – I grew my beard out for the first time ever… and Jack approved (for the most part). It’s gone now, but the pictures give you an idea of what it looked like. What do you think? Beard or not?

Stealing a page from Josh, I’ve put up some rotating header graphics here on englers.org.

So far there are 20 graphics in the rotation, and if you want to see them all, just visit this photo album of them all. I’ll add more I’m sure, as we find more fun photos to turn into headers.

Today while I was working, Christine took Jack for a walk. He enjoyed walking around the block with her, and it was good for them to get out of the house for a few minutes. Hopefully all three of us can take a walk together more, or go to the park down the street. That’d be a lot of fun.

After work, I sat down with Jack to watch The Passion of the Christ DVD while Christine when to Gold’s Gym with Michelle. Jack and I made it through about 2/3 of the movie before Christine got home. Christine had a good time at the gym.

Watching The Passion was hard to do, but I’ll watch the rest of it again when I have some time to finish the movie… Christine’s not ready to watch it yet. I’m interested in the movie because I never really paid all that much attention in Sunday School. I don’t know that the movie is 100% accurate (or that it’s not for that matter) but it can’t be all that different than all of the other ‘made for TV’ versions I’ve seen over the years.

I’m playing with the site design here on englers.org a little, so bear with me while I sort it out. Bottom line, I’m moving the site over to WordPress from phpNuke because well… honestly phpNuke was a pain to maintain.

WordPress will let me give Christine her own login, as well as Evan and Shadel, or my mom, so they can login and post stories if they want to. It’ll also make it much easier for people to make comments on stories, as it actually works… instead of it sort of working sometimes, like the old software worked.

Anyways, bear with me while I customize the look and feel of the site.

On Friday night, Christine and I dressed Jack up and went to dinner with some of our dearest friends in Austin. Joe Bunner, his wife Missy, and the girls Madison and Mackenzie took us to dinner at the Waterloo Ice House out on 360 and 2222. The photo gallery is here.

We had a blast eating there, and spending time with our friends. They’re actually selling their house too, by the way. It’s a 2600 square foot 3 bedroom 2 bath with a pool on a cul-de-sac in northwest Austin. If you’re interested, let me know and I’ll put you in touch with Joe.

Then on Saturday night, Kim, Brad, Michelle, Josh and Elise came over for “game night”. We never did get around to playing the games though.

Josh and I started drinking cooking around 5:30, but, I miscalculated and bought twice as many chicken wings as we really needed. While the prudent thing to do might have been to put half of the wings in the freezer, we decided to go ahead and just cook them all.

4 hours later we were done. Everyone was starving. So we ate, while the girls played on the computer, and the boys went outside to smoke a cigar. Good times. Some photos from the night are here.