Christine, Jack and I flew to Dallas this past weekend to visit with the grandparents and see Jack’s Uncle Steve on his 27th birthday.

We flew up Saturday morning. Jack and Christine got to fly first class to Dallas for their first time ever… fun! Jack fell asleep while the plane was coming down to land and stayed asleep in my arms all the way out of the gate, into the terminal. He woke up as we walked into the baggage claim area.

Mary picked us up, and we headed to their house.

On Saturday evening, Christine and I let Mary take care of Jack for the night, and we headed to a movie. We ended up seeing “In Her Shoes” with Cameron Diaz. It’s a sappy girly movie about two sisters growing up without a mother (dear old mom killed herself when they were 6 and 8) and finally rediscovering their grandmother after they got into a fight. Sappy movie, but Cameron Diaz appears quite a bit wearing little more than her underwear and a pair of high heels, so it’s not a bad movie for the fellas to go see. In fact, we both enjoyed it a lot. 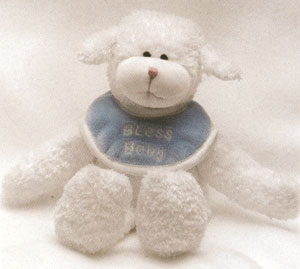 On Sunday, we slept in (Mary got up early with Jack) and then hung out with the family. Christine made a trip to an Oshkosh retail store that was going out of business. She spent about $100 on clothes for Jack, but came home with probably 20 items, which ain’t bad for Oshkosh clothes… gotta love that thrifty streak in that wife of mine ;). She also picked up a second Baa Baa (by Boyds, order online here, pictured on the right) for Jack – so that we have a second one, just in case we lose the one Kim gave us.

Steven and Michael came over for dinner, and we all enjoyed a good meal, and then home made cheesecake before Steven opened his presents. Mmmmm that cheesecake was good!

This morning, we got up, said our goodbyes and Michael picked us up for the return trip to the airport. We boarded as soon as we got there, and we were sitting in row 3, seats E&F, which happens to be the first row on the airplane, with easy access to the first class lavatory…

Jack drank a bottle during take-off, and proceeded to giggle and play all the way to Austin. About 2/3 of the way to Austin, Christine decided she needed to pee. So, she got up, and went into the lavatory.

As soon as she closed the door, and latched it, we hit a little turbulence. I laughed a little to myself, as I knew Christine wasn’t enjoying that. She’s usually pretty clausterphobic and hates flying, especially take-off, landing and turbulence. Think of the last time you used the toilet in an airplane… small space, doesn’t smell great, and combine that with a fear of flying and a hatred for turbulence.

Anyways, as soon as we hit the turbulence, I started giggling. Then the stewardesses came running back up the aisle with the drink cart. The were storing it, when I noticed the “occupied” sign on the lavatory door changing to “vacant” which meant Christine was coming right back out. But there was a stewardess standing in the way (remember Christine hates flying and turbulence).

Then we hit a little more turbulence. At this point, I was trying not to roll into the aisle laughing, and Jack was just having a good old time bouncing in my lap.

The stewardess moved out of the way, right as Christine opened the door to the lav, she looked out at me… saw me laughing and starting laughing at herself too. As she tried to cross the aisle, I told her to close the bathroom door. She pushed it and tried to sit down again.

I had to point out that the door wasn’t closed. She pushed it again, and tried to sit down.

I cracked at that point, and pointed to the door. She lost it too and was laughing hysterically as she shoved the lav door shut and finally plopped into her seat.

We both laughed so hard at that point that I thought I was going to need to pee too.

Then, after we calmed down a bit, Christine laid back in her seat and started zipping her pants up. Turns out, she was so freaked out by the turbulence that started right after she unzipped her pants that she decided to hold it, and then tried to get back to her seat with her pants still unzipped, and then the damned bathroom door wouldn’t close.

We proceeded to laugh until we had tears streaming down our cheeks.

We landed uneventfully about 10 minutes later, taxied to the terminal and got off the plane. What fun!

They let us borrow one of theirs, and we drove home, stopping at Sonic for a super heathy lunch before getting home.

All in all, a great trip! It’s always fun to see the Grandparents.

Next big trip up — the Austin County Fair this weekend!