Christine and I skipped church this morning (Jack was napping: “Never wake a sleeping baby”). While sitting in the dining room, downloading video off the video camera (finally getting around to trying to make a video for Ella of her first birthday party), I played around with Google Maps and their new satellite views.

This is my house, in Austin…. right where the mouse pointer is: 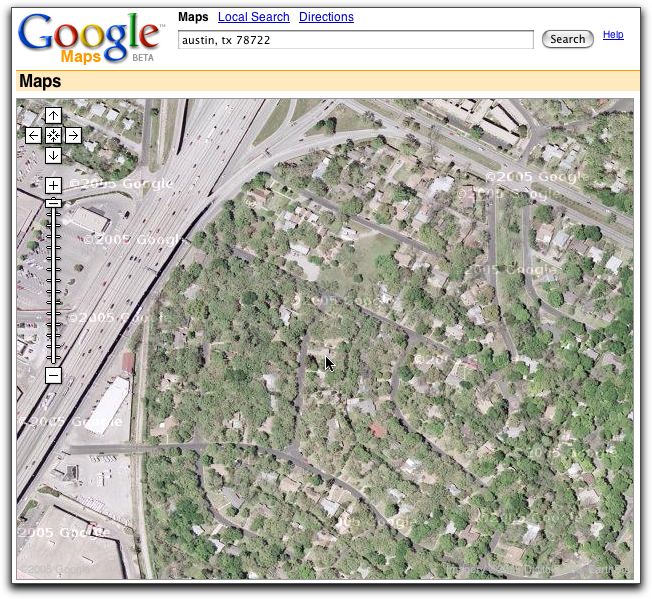 This is the rental house we rented for a year when we first moved to Austin.

This is the house Christine and I built in Fort Worth. Freaky… our house is the one in the middle with the greenest yard, and a bigger back yard than the other homes on that street. Really miss that neighborhood.

This is where Christine and I lived in Du Pont, Washington, when I was stationed at Fort Lewis.

This is where we lived in Radcliff, KY, when I was stationed at Fort Knox.

Here’s a closeup of the Quadrangle (where the Corps lives) and Kyle Field at Texas A&M, where we went to college.

This is Bellville, where I spent my early years growing up.

(It’s annoying that I can’t zoom in further in those rural areas, but can on a military based near Seattle … weird … especially considering even the military issues maps I used in the Army had areas of the map that were “off limits” and showed up as just big white empty spots on our map of the base)

This is where the first house I remember is (Dunstan is two streets north of the football stadium in the picture – that’s Rice University in the photo), from my early childhood.