Jack’s getting bigger, and older, and smarter every day.

One of the toys Jack got for his 1st birthday is a collection of 5 or 6 animals, all on a neat little playscape, and these animals all sit on little buttons that make the noise of that animal when pushed down.

There’s a little birdy (sings a chirpy little bird song), and a lion (Rarrr!) and a monkey (hoo hoo hoo hoo), and a seal (hmmm, can’t remember that sound, I think it’s water splashing) and a polar bear (Roar!!!), and an elephant (brbrbbrrbr!).

In the course of playing with that toy, Christine taugh Jack that elephants trumpet by holding their trunk up and away from their body. Jack also has a few Baby Einstein DVDs that have elephants in them, and he loves watching the elephants…

One day, while I was at work, Christine asked Jack a question:

“What sound does an elephant make?”

To which, Jack responded by raising his arm in the air (like he’d seen Christine do) and trumpeting, in his best imitation of an elephant.

We were tickled pink.

Since that day, we’ve been trying to capture it on video, and we finally did the other night.

Here’s the answer to the question “what sound does an elephant make?” 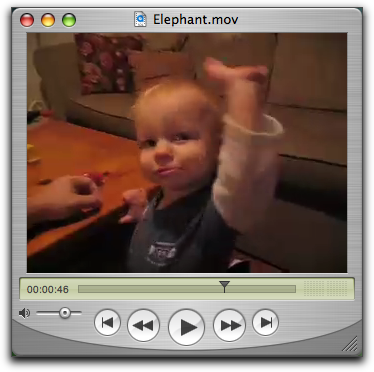 Just in case you were wondering 😉