This week, I’m taking a few days of vacation. It’s nice, but, because it’s Thanksgiving and we’re having Jack’s first birthday party on Saturday, we’re spending a bit of time cleaning up the house, getting organized, and cooking.

On Saturday, at 4:00, we’re having Jack’s birthday party. Here’s the invitation: 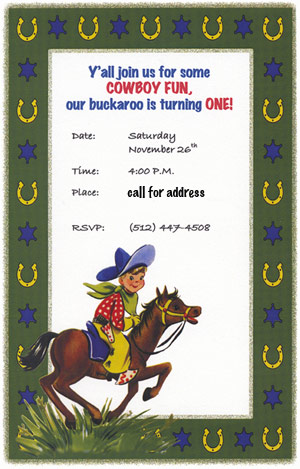 Christine ordered the invite from PaperMatinee, after we decided that we were going to do a Cowboy themed party. (Come on, what else do you do at Thanksgiving in Texas but yearn to play Cowboys and Indians?)

We printed 30 invitations, to save a little money, but we wanted to invite all of our friends to the party. The reality is that because it’s Thanksgiving weekend, a lot of our friends can’t make it (we went out with Josh and Elise on Sunday evening so they could wish Jack happy birthday before they head off for Oklahoma this weekend. They gave Jack a push toy that pops and sings while counting to 10, a little car that goes vroom-vroom, a Dr. Seuss Book, and an adorable little outfit – yes, I said adorable) … so, if you’re in Austin for the weekend, and would like to come celebrate Jack’s one-year old birthday, stop by (please call first, so we know we have enough food). I think the fare for the day will be chili, hotdogs, hamburgers, and anything else we can think of that’s “Cowboy friendly”. 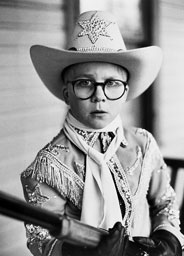 Looking forward to seeing that movie again this Thanksgiving. I’m sure it’ll be on TNT non-stop.