Tonight, Christine and I fed Jack his first meal from a spoon.

Over the last week or so, Christine has noticed that Jack smacks his lips when she’s eating. Supposedly that is one of the signs that your child is ready to eat real food.

We’ve read that your supposed to start feeding your kid real food when they’re 4 months old. Jack’s almost there, so, we figured we’d try feeding him some rice cereal tonight.

So, here’s the movie of Jack eating his first meal from a spoon. The movie is about 10 minutes long (and is 55MB in size), because I just couldn’t bear to edit too much of it … it’s precious to us, and we hope you enjoy watching him eat, and hearing us discuss the process. So, without further ado: 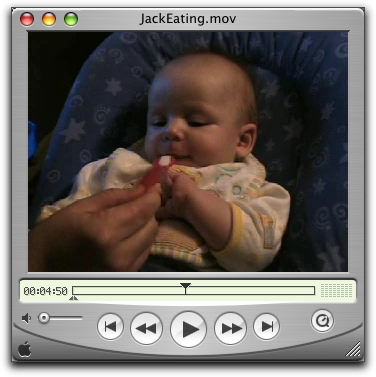 After feeding Jack that little bit of rice cereal, Christine fed him some of the good stuff. Erin showed up shortly after we fed him, and Christine and I headed off to Weight Watchers. Erin fed Jack a formula bottle while we were gone, and when we got home, he was sleeping. We fed him another bottle right before bed time, and here’s hoping he sleeps through the night.

Oh, and I’ve lost 8 pounds in 3 weeks, thanks to Weight Watchers.

This movie comes to us from the backlog of videos and photos I have on my hard drive:

Christine, Jack and I boarded a Southwest flight headed for Oklahoma City last Friday in the morning. We checked our baggage at the curb, then I parked the car, and met Christine and Jack inside the terminal. We were all ready for Jack’s first airplane ride.

Jack did really well on the plane on the way up to Oklahoma. We fed him on ascent and descent, or let him suck on his pacifier, and he was only fussy on the descent into Oklahoma City (we had to land in Dallas on the way from Austin to OKC). Not bad for his first flight. The flight attendants were quite taken with him too.

In Oklahoma City, we rented a car from Avis, and headed to Grandmother’s house (Grandmother is Christine’s Mom’s Mom – Gulah Daron) for lunch. It was nice to see Grandmother on Friday, only our visit was too short. We drove to Tulsa in the rental car after lunch.

Gayle served a Cream of Aspaaragus soup, a salad, and a shrimp dish as the main course. All of the dishes were very good. The conversations centered around what Elizabeth was doing as she finished up her schooling at university, and how Christopher (Keith and Mary’s other child) is going to law school later this year. We also talked about how little Benjamin, Gayle and Ben’s grandson, is learning to wear hats a lot, as he gets bigger… We discussed living in Austin and being an Aggie, and how Mark is doing in the police academy there in Tulsa.

After dinner, Oma and Jack got aquainted quite a bit. Jack was having a good ol’ time trying to figure out what Oma was saying in German (she pretty much only speaks German most of the time), while the rest of us were also trying to figure it out. Jack laughed and giggled as Oma tickled him. He enjoyed meeting her and the rest of the family very much.

We spent the night at Ben and Gayle’s – I slept a full 12 hours (I have some sort of flu… sucks) while Christine got up a few times during the night to take care of Jack.

On Saturday morning, we got up, enjoyed breakfast and lunch with Gayle and Ben, as well as just playing with Jack. Gayle was really helpful and loved just holding Jack while Christine and I ate together (those moments are rare). We packed the car, and headed back to Oklahoma City around 2:00 in the afternoon after a too short trip to Tulsa.

Back in Oklahoma City, the family had gathered at Grandmother’s house to start celebrating Grandmother’s 93rd birthday party. Let me spell that out for you folks. Ninety Three. That’s right: NINETY THREE. Wow. Just imagine all the stuff that’s happened since 1912 folks. Grandmother has seen it all… literally.

The family for this trip consisted of Roy and Carol (Christine’s Mom’s oldest sister), Mary (Christine’s mom) and Charles, Shannin and Shaina (Charles is Mary’s nephew and Grandmother’s grandson. Shannin is his wife, and Shaina is their 5 month old daughter – Jack’s 2nd cousin). We all met up at Grandmother’s around 5:00 for dinner and to catch up with each other, since the last time we’d been together. Everyone seems to be doing well, and we all agree that we don’t get to see each other often enough.

Shaina is adorable, and is growing by leaps and bounds. She has got to have the longest eyelashes I’ve seen on a 5-month old ever. Carol and Roy have new grandchildren, and Grandmother really enjoyed seeing Shaina and Jack together. We ate pizza for dinner and I turned in early (getting over that flu still).

We attended church at First Baptist Church in downtown Oklahoma City with Grandmother and family. It was a wonderful service, with the Oklahoma Baptist Univeristy’s Bison Glee Club sitting in for the choir. The pastor recognized Grandmother and had some wonderful words to share with the congregation about her, as did all of the members of the church that we met. It’s easy to know that Grandmother is dearly loved by her church family there in Oklahoma City.

After church, we went to lunch at Abuelo’s, and then headed back to the house to pack. We said our goodbye’s and headed to the airport. Christine, Jack and I barely made it to the airport in time for our flight, only to find it delayed by 30 minutes.

We boarded the flight and then got the Dallas just in time to catch our connecting flight to Austin. Jack did really well on both flights, finally falling asleep right before we started descending into Austin.

When we got to the car, we started searching for our car keys — only to call Gayle and discover that I’d left the car keys inside my jacket that I wore to Tulsa… And that jacket is still in Tulsa. Stupid, Stupid, Stupid. Gosh!

We had a great trip to Oklahoma City and really enjoyed spending time with our family… its too bad the trip was so short.