Two weeks ago (man I’m way behind) a friend of mine from Portugal dropped into Austin to check it out: 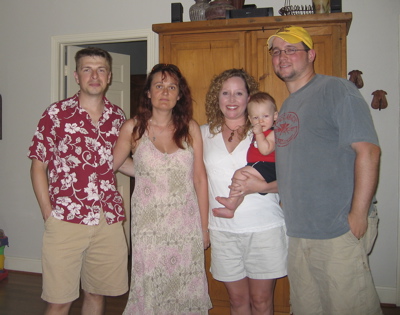 On the left, is Olivier Travers, publisher of Scifan.com, DefenseIndustryDaily.com, and one of my original partners on MarketingVox.com, and his wife.

Olivier and I first met a good couple of years ago on the internet, and we respected each other’s work. We also shared a few mutual friends. Later, we founded MarketingVox.com (as MarketingFix.com). Then I moved to Austin, and became less involved. Olivier and the other guys carried on, and then we sold it to Andy Bourland (don’t worry, I didn’t get rich)… Anyways, over the past two years, I’ve told Olivier how much I loved Austin, and they planned a trip to the States to see Austin, and a few other cities (I think about 9 cities in 12 days was their plan.

About a week out, Olivier emailed me a note saying “I’ll be there next week.”

Then I thought “crap!”

I’d just booked tickets to Knoxville, TN, on the day that they were arriving in Austin. I felt horrible, because I knew they were coming, and I didn’t put it on my calendar, and I wasn’t going to be able to show them Austin…

So, after they flew in from Portugal on Wednesday morning, we met at Mueller’s BBQ over here on the east side, and enjoyed some good old fashioned Texas Barbeque. mmmmmm…. mmmm….

Then we came back to the house for a few moments, and took a picture before I headed off to the airport.

It was really good to finally meet Olivier in person, I just wish I would have taken those days off, and really showed them Austin.

At least we met, and if Christine and I can swing it, we’re going to try and visit them in Europe sometime in the next 12 months.

3 Replies to “Friends from Portugal”